We recently started hitting some capacity issues with an SQL Server Reporting Services box hosted on Microsoft’s Azure Cloud Platform. The server had been set up around the time, Microsoft end-of-life’d their platform-as-a-service report server offering. This forced everyone back onto standalone instances. The server was a Basic A2 class VM (3.5GB Ram, 2 Cores). Originally, it only had to handle a small amount of report creation load. However, in recent times, that load had gone up significantly. Due to the “peaky” nature of the customer’s usage, we would regularly see periods where the box could not keep up with report generation requests.

In the past week, we’ve moved the customer to a new SQL Server 2014 Standard Edition install. Here are a few of the things we’ve learned along the way with regards to setting up SQL Server as a standalone instance on an Azure VM (Virtual Machine).

First off, you should choose a DS scale virtual machine. At the time of writing, Microsoft offers 4 different VM classes in the North Europe region: A, D, DS and D_V2. Only the DS class machines currently support Premium Locally Redundant Storage (Premium LRS) which allows you to attach permanent SSD storage to your server.

Within the DS Set, DS1-DS4 have a slightly lower memory: core count ratio. The DS11-DS14 set has a higher starting memory foot-print for the same core count. We went with a DS3 server (4 core / 14GB) which we can downscale to DS1 during out of hours periods.

During setup ensure that you’ve selected a Premium Locally Redundant Storage account which will provide you access to additional attachable SSDs for your SQL Server. This can be found under Optional Configuration > Storage > Create Storage Account > Pricing Tier 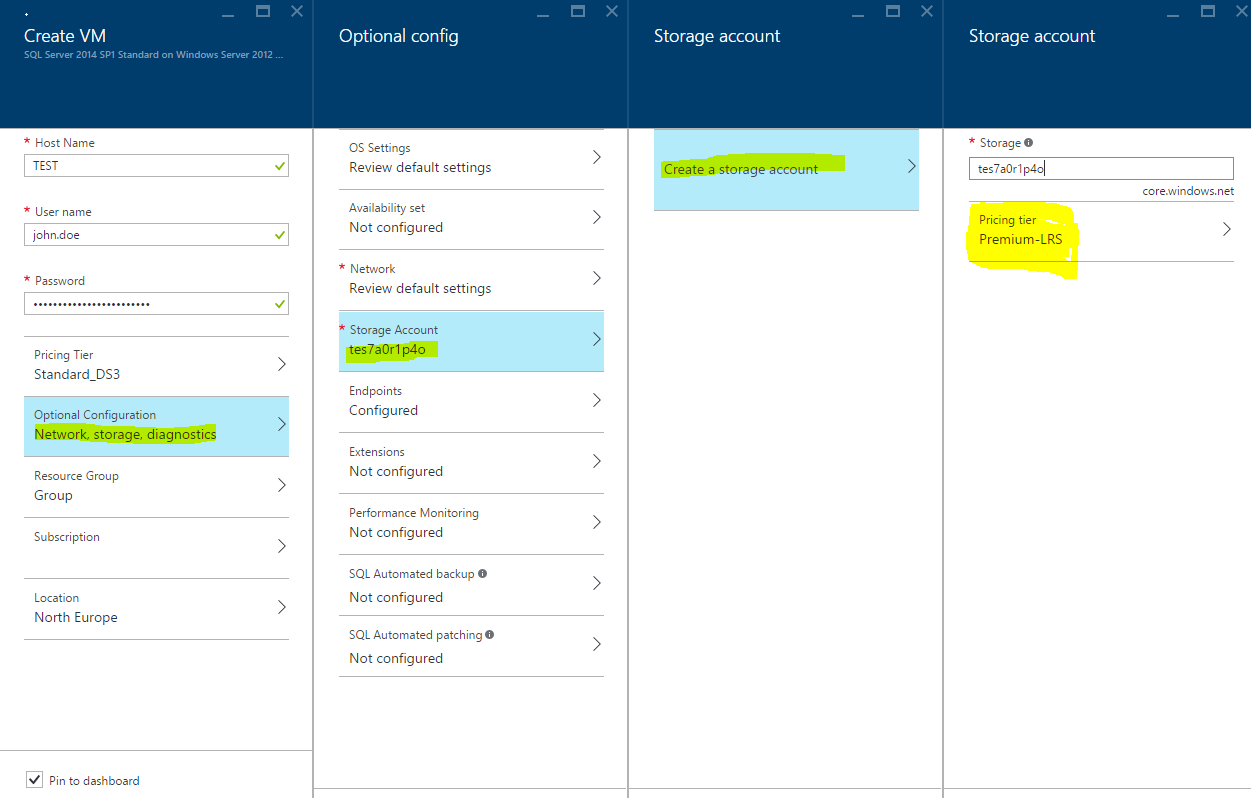 Security will be somewhat dependent on your specific situation. In our case, this was a standalone SQL Server with no failover cluster or domain management. The server was set up with a long username and password (not the john.doe account in the screenshots).

We also lock down the management ports for Remote Desktop and Windows RM, as well as the added HTTPS and SQL ports. To do this, add the public-to-private port mapping configurations under Optional Configurations > Endpoints

Once you’ve finished setting up the configuration and Azure has provisioned the server, you’ll want to reenter the management blades and add ACL rules to lock down port access to only the IP Ranges you want to access it. In our case, our development site, customer site, and Azure hosted services.

You can add “permit” rules for specific IP addresses to access your server. Once a single permit rule is added, all other IP Addresses/Ranges are blocked by Default. 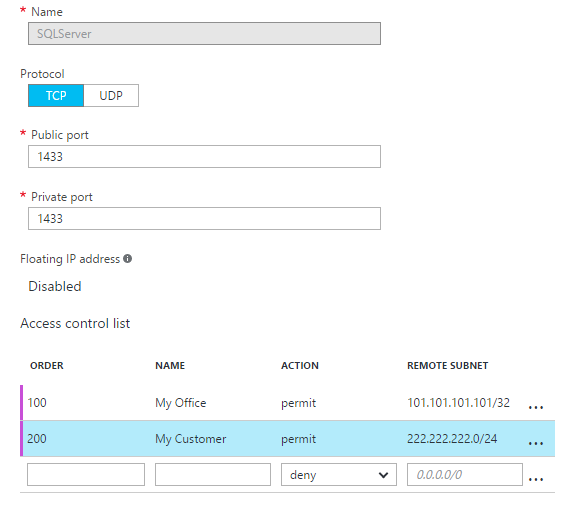 SQL Azure VMs can now leverage an automated off-server database backup service which will place your backups directly into Blob Storage. Select SQL Automated Backup and enable it. You will be asked to specify where you would like to store your backups and for how long. We chose to use a non-premium storage account for this and depending on the inherent value of your backups and whether you intend to subsequently off-site them yourself, you might want to choose a storage setup with zone or geo-redundancy. You can also enable backup encryption by providing a password here. 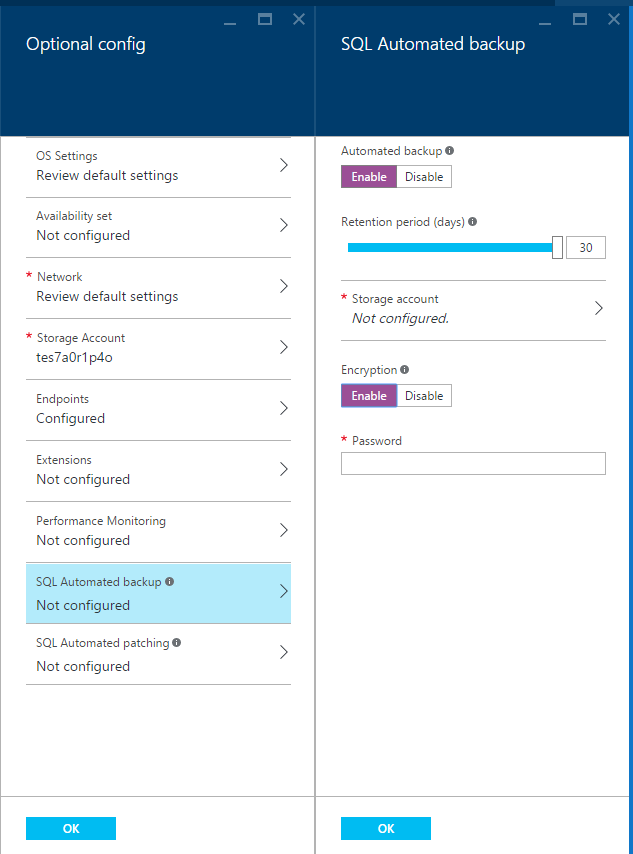 Now that your server is up and running, you can log in via Remote Desktop. The first thing you’ll want to do is patch your server. As of mid-February 2016, the base image for SQL Server 2014 on Windows Server 2012 Standard R2 is missing quite a number of patches. Approximately ~70 critical updates and another ~80 optional updates need to be installed.

Once you’ve got your server patched, you can take a look at the disk setup. If you’ve chosen a DS Class Server, you’ll notice that you have 2 Disks. A regular OS disk, and an SSD Temp Disk. This temp disk is NOT to be used for real data, it is local only to the VM while it’s running and will be deallocated and purged if you shut the server down

You can, however, purchase additional SSD disks very easily. Head back out to the Azure Management Portal, find your VM, go to settings and choose Disks. In the following screenshot, we’ve chosen to add an additional 2 x 128GB disks (P10 class) disks to the server. The SQL Server best practices document recommends using the 1TB (P30 class) disks which do give a significant I/O bump but they are also more expensive.

Once your disks are attached you can access and map them inside your VM. We chose to set up the disks using the newer Window Server 2012 Resilient File System (ReFS) rather than NTFS. Previously there were potential issues with using ReFS in conjunction with SQL Server, particularly in relation to sparse files and the use of DBCC CHECKDB, however, these issues have been resolved in SQL Server 2014. 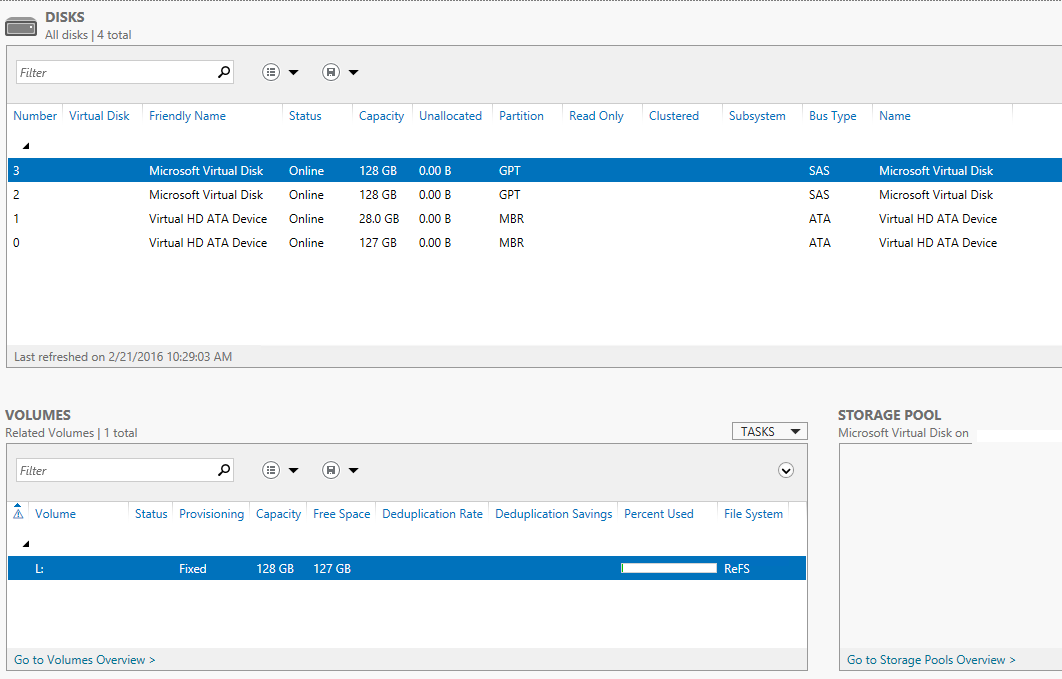 SQL Server VM Images come pre-installed with SQL Server so we’ll need to do a little bit of reconfiguration to make sure all our data and log files end up in the correct place. In the following sections, disk letters & paths refer to the following.

First, we need to give permission to SQL Server to access these other disks. Assuming you haven’t changed the default service accounts, then your SQL Server instance will be running as the NT SERVICE\MSSQLSERVER account. You’ll need to
give this account Full Permissions on each of the locations you intend to store data and log files. 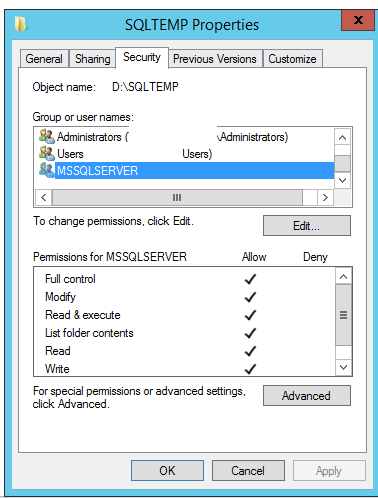 Once the permissions are correct, we can specify those directories as new defaults for our Data, Logs, and Backups.

Next, We’ll move our master MDF and LDF files, by performing the following steps. 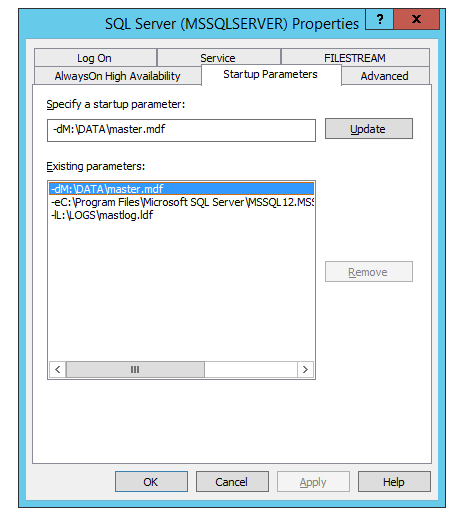 When our server comes back online, we can move the remainder of the default databases. Running the following series of SQL Commands will update the system to expect the MDFs and LDFs and the new location on next startup.

Shut down the SQL Instance one more time. Physically move your MDF and LDF files to their new locations in Explorer, and finally restart the instance. If there are any problems with the setup or the server fails to start, you can review the ERROR LOG in C:\Program Files\Microsoft SQL Server\MSSQL12.MSSQLSERVER\MSSQL\Log\ERRORLOG

There are a number of other steps that you can then perform to tune your server. You should also set up SSL/TLS for any exposed endpoints to the outside world. (e.g. if you are going to run the server as an SSRS box). Hopefully, you will have a far more performant SQL Instance running in the Azure Cloud.

Pointers for Outsourcing your IT 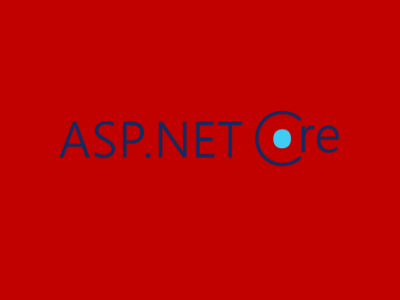